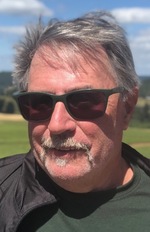 Robert Thomas “Bob” Whitcomb Jr., 67, of Eastlake, passed away Jan. 31, 2021, after a short battle with cancer. Bob passed peacefully with his family by his side at the Justin T. Rogers Hospice Care Center.
Bob was born Sept. 4, 1953, to Robert Whitcomb Sr. and Rita (nee Stuber) Whitcomb in Euclid.
After graduating from St. Joseph High School in 1971, Bob spent his time traveling and working across the U.S., attending concerts, and making countless memories with friends and family. In 1985 he met the love of his life Karla (nee Wiese), and they wed in 1988, going on to have two children, Dan and Amanda.
A union sheet metal worker for 27 years, the trade brought Bob, Karla, the kids, and Bob’s beloved mother-in-law, Joan Wiese to Henderson, Nev., where they resided for 18 years before returning to Ohio.
Bob’s family meant more to him than anything else in the world, something he often mentioned. He was unendingly proud of Dan, Amanda, and Karla and always tried his best to support them. He was the family’s rock when he lovingly cared for Karla during her recent battle with breast cancer.
After retiring in 2014, Bob had time to pursue his passions for boating, fishing, scuba diving in the Caribbean, traveling, visiting his children, cooking and entertaining, making mosaics, and rooting for Cleveland sports teams. Bob loved spending time in St. Thomas, USVI with Karla, where he lived, played, and gave effortlessly to local hurricane relief.
Bob was preceded in death by his parents, Robert and Rita Whitcomb; and mother-in-law, Joan Wiese.
Bob will be loved and missed by his wife of 32 years, Karla; son, Dan (Michelle) of Henderson, Nev.; daughter, Amanda of Eugene, Ore.; and siblings, Tom of Mentor; Dawn Bellis (Al) of Willowick, and James (Colleen) of Eastlake.
A celebration of life will be held at a future date.
Donations in Bob’s memory can be sent to St. Jude Children’s Research Hospital at http://giftfunds.stjude.org/RTWMEMORIAL.
Arrangements are entrusted to McMahon-Coyne-Vitantonio Funeral Homes in Willoughby and Mentor.
To leave condolences for the family, visit www.MCVfuneralhomes.com.